Like him, or loathe him, Oscar Wilde was pretty smart. This is one of his pronouncements;

Yes, folks, it has started.

This image was taken in Kerk Straat, showing that work has started, in accordance with the programme outlined in the letters below. 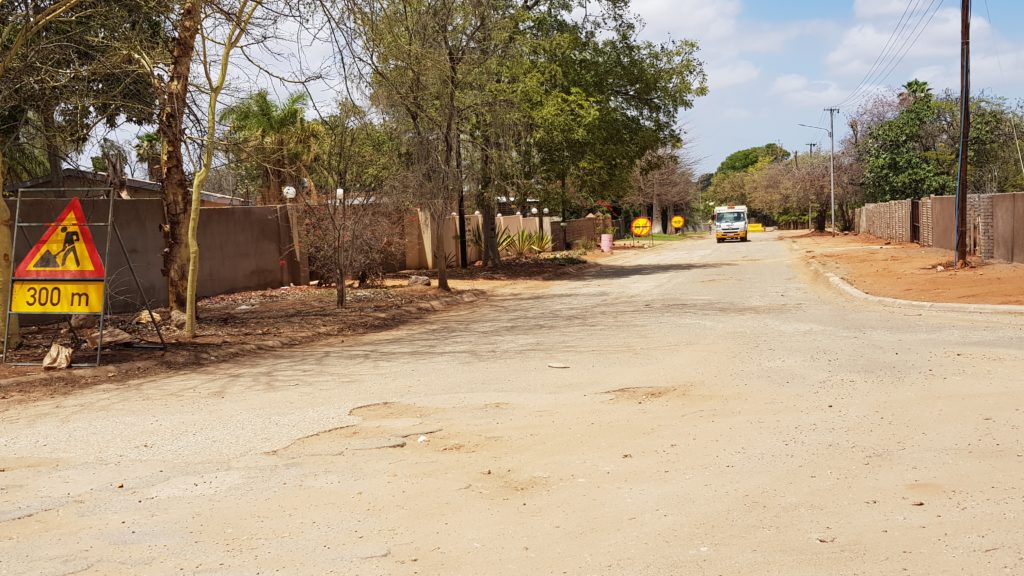 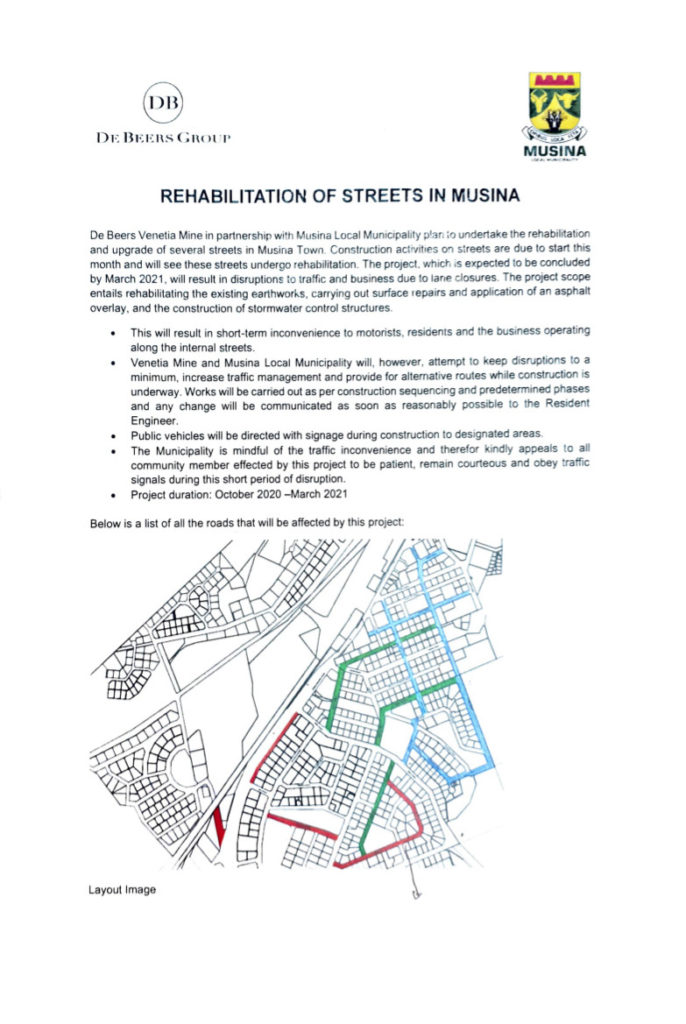 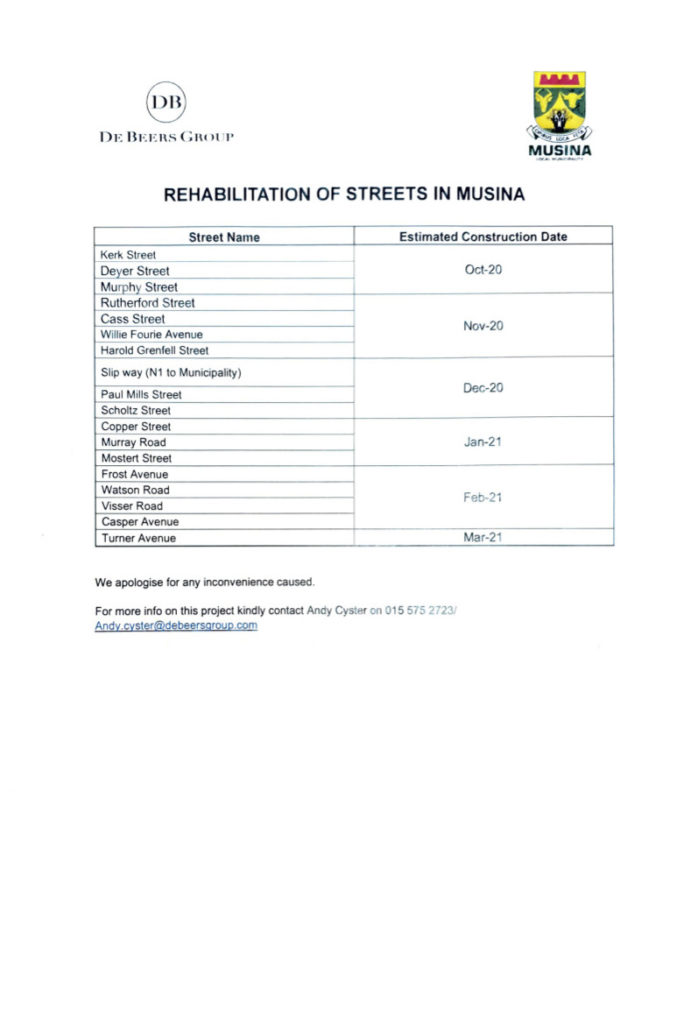 This past week was designated as Invasive Plants Awareness Week with a request going out from the South African National Biodiversity Institute for projects to be undertaken in dealing with invasive plant species, in one’s own locale.

While riding the Malala Drift road to the east of Musina, I have become alarmed at the number of clumps of a very invasive alien species which have appeared. 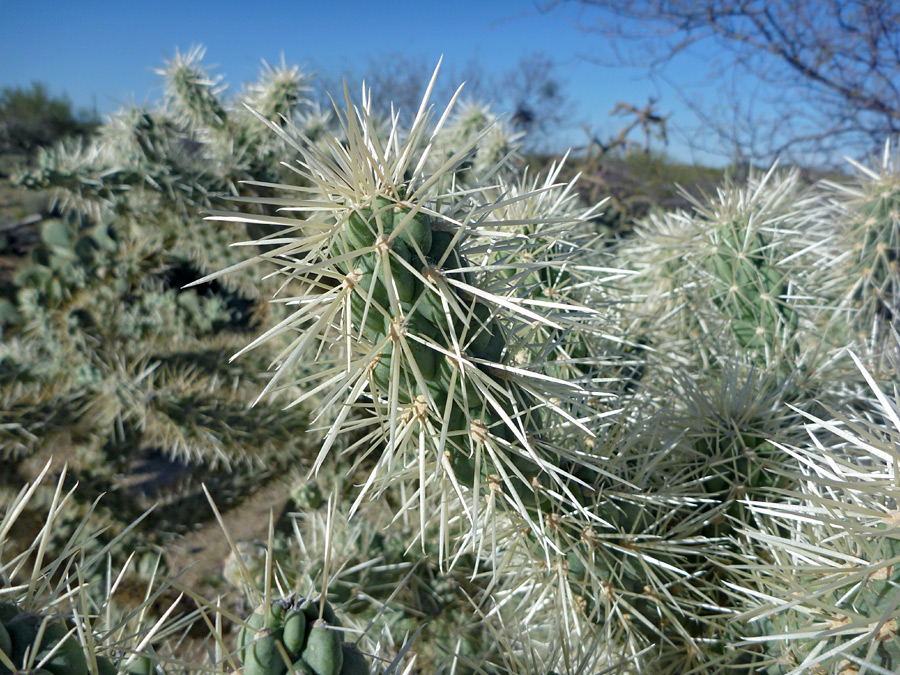 Namely, cylindropuntia fulgida, which rejoices in the common names of Jumping Cholla or Chain Cholla. This is a member of the cactus family originating in the Sonoran Desert and South Western United States. The first common name refers to the ease with which segments of the plant, by means of it’s fierce, barbed spines, attach themselves to animals and humans. It is said that you don’t even have to touch it, it jumps onto you. The thorn sheaths are quite loose, so that the segment will fall to the ground, (if you’re lucky), in a short distance, where it will take root. Unfortunately, the sheaths remain embedded and are difficult to remove, because of the barbs.

I had an idea that Miss Helene Fick from Eric Louw High School and some of the boarders might like to participate in an outing to at least start with a cleanup alongside the road. On Saturday morning, a group of the boarders met at the hostel gates, where I gave them a little rundown on the enemy and how I anticipated dealing with those which we found. As previously mentioned, segments will root easily, so just digging them out would not be sufficient to eradicate them, they need to be burnt. In two vehicles, one moving ahead, spotting plants and the second with the eradication crew following behind, we started out, having very little idea of the magnitude of the task we had embarked on.

Click on the images in the gallery, to enlarge them 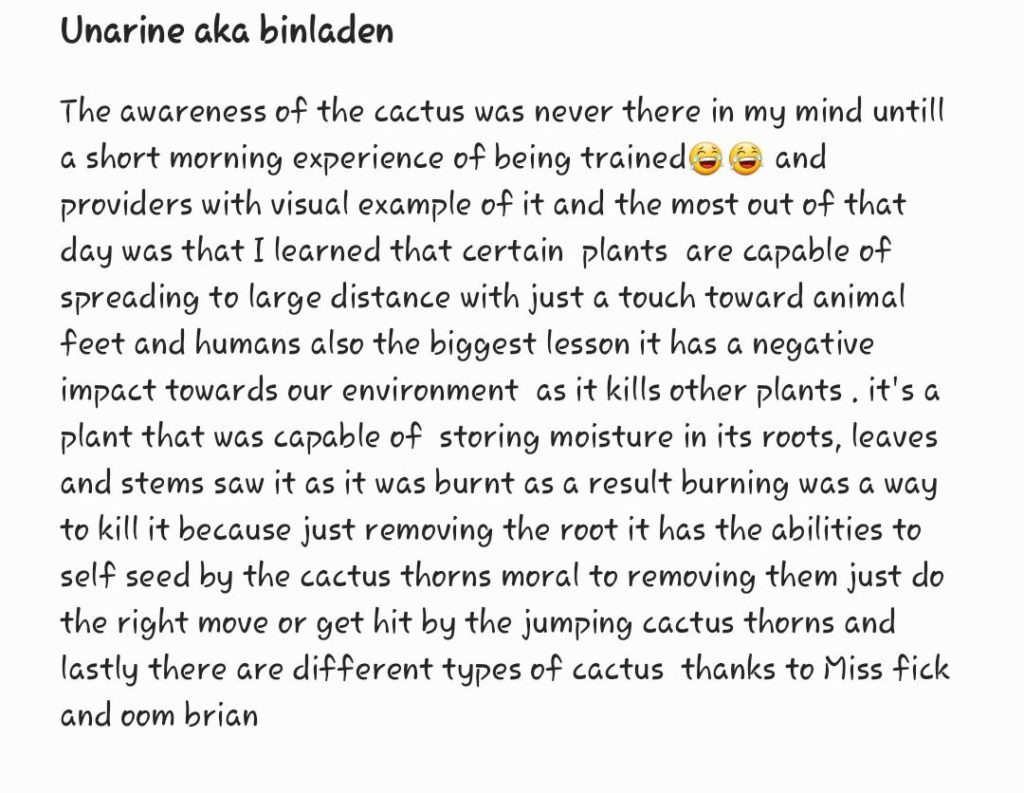 In a stretch of less than a kilometre, the spotters had indicated nine clumps. the tools guys followed up and dug and cut the offending plants out, all the while scouting for more clumps, of which there were many. The pieces, together with large amounts of the litter still befouling the verges, despite a number of efforts to clean it up, were piled up, anointed with spirits of Boy Scout and set ablaze, with a very satisfying “Woof”. The operation took more than double the anticipated 90 minutes, at the end of which, refreshments were dished out and enjoyed.

Sincere thanks must go to The Cactus Corps; Unarine, Jacques, Liyanda, Christable, Kathu, Karendwe, Ndima and Junior who showed a very strong spirit of social awareness in participating in this event which will ultimately benefit the entire community. Well done, team. More volunteers are needed to continue the good work, speak to Miss Fick.

This is just the beginning. The entire length of the Malala Drift road has “Cholla Gardens”, as they are known and if nothing is done to curb the spread, our dry climate which suits these desert plants, will lead to an uncontrollable spread by humans, domestic animals and pets and wild animals, like baboons, monkeys, antelope and even creatures as small as hares and rodents.

The nearest SANBI facility is in Thohoyandou. If we don’t help ourselves, no-one else will. 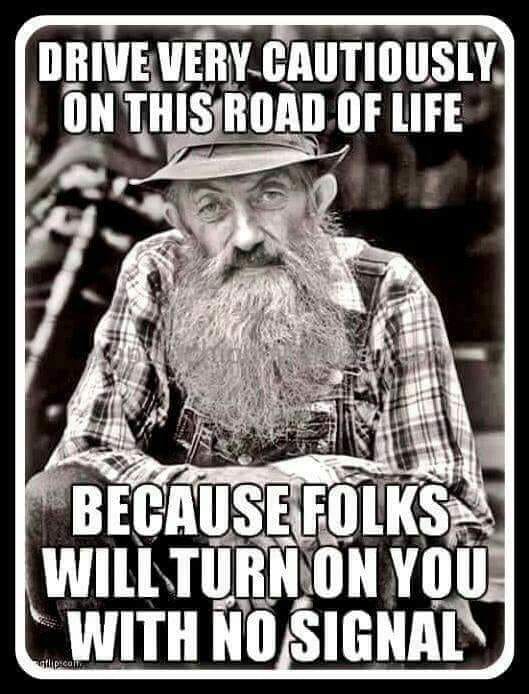 When Alexander the Great visited Diogenes and asked whether he could do anything for the famed teacher, Diogenes replied: “Only stand out of my light.” Perhaps some day we shall know how to heighten creativity. Until then, one of the best things we can do for creative men and women is to stand out of their light. -John W. Gardner, author and educator (8 Oct 1912-2002)

It’s said that “power corrupts,” but actually it’s more true that power attracts the corruptible. The sane are usually attracted by other things than power. When they do act, they think of it as service, which has limits. The tyrant, though, seeks mastery, for which he is insatiable, implacable. -David Brin, scientist and science fiction author (b. 6 Oct 1950)

This is so pertinent in our country, today. 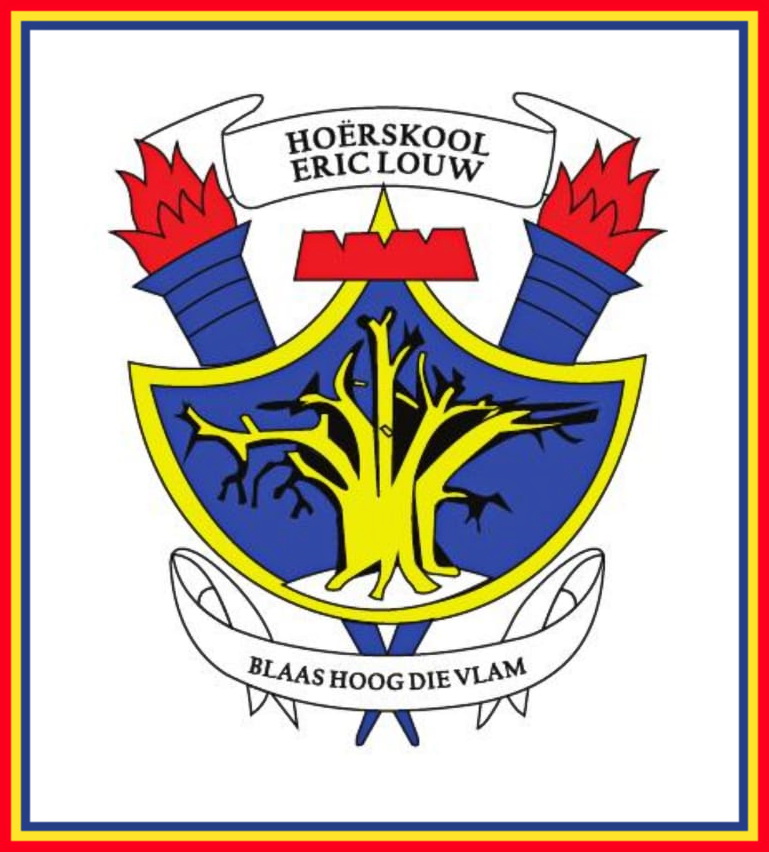 Click on the link to the Eric Louw page, in the list of contributors to the left<<<<<, to read how well the Eric Louw team are doing.